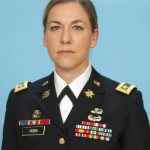 Adria O. Horn is currently Director of the Maine Bureau of Veterans’ Services, having left active duty as Lieutenant-Colonel from the Army Reserve after serving through five deployments. A proud, effective, and approachable leader, Adria oversees the state bureau and a 40-member staff. She advocates for about 140k veterans statewide while overseeing benefits plus four veteran cemeteries. She speaks frequently throughout Maine on veteran-related topics and contributes to many charitable organizations to benefit veterans.

When she left active duty, she wasn’t sure what path she wanted to take as a civilian. She started working for a Senator, and one day she received a call from the previous director who was preparing to retire and offered her the position of Director. She finds her career to be very rewarding. In the military side of her life, there’s still a lot of gender discussion, particularly around the expectation of who she should be vs. who she is. She’s not what some people expect, and it disrupts their bias. She’s glad to be seen as an “approachable authority.”

She strives for meaningful work and a balance between her family and work life. Adria is proud of the fact that she’s in a place where she never thought she’d be, and it’s been better than she expected. She’s been deployed five times, and has had some terrible experiences & seen terrible things, but she tells us, “in order to grow, you have to bloom where you were planted.”

Adria received a MBA in Marketing from Northeastern University in 2013, and a Bachelor of Science from the United States Military Academy at West Point, class of 2001. She is a devoted wife and loving mother of one daughter, and is expecting her second child in July. In her spare time, Adria enjoys farming, and has sheep, yaks, rabbits and chickens. She finds joy spending time with her family at their home in Pittston, Maine.

The Worldwide Association of Female Professionals Member Adria O. Horn can be found on the Who’s Who Directory, where she is looking forward to networking with you.