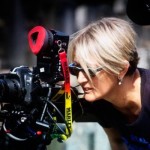 Flaminia Graziadei is CEO, Director and Producer at LonRom Film Production, an independent cinema and television production company dedicated to making “movies with a meaning.” With over 20 years of experience in the industry, Flaminia oversees projects from inception to post-production, and has a key role in story development, direction and production.

Most recently, the production team released “The Power on One Coin,” a short raising awareness about mental health issues, and Interplay, a web series of which she recently completed the pilot, that won two awards and is currently touring the festival circuit. Flaminia also this year established Food for Movies, a brunch group for industry professionals dedicated to producing commercials with a cinematic aesthetic.

As a director, Flaminia’s work has been seen all over the world, from Europe to Mumbai to Houston. She was the Gold Winner for Directing and Gold Winner for Best Narrative Short at the Latitude Awards 2018, received the Platinum Award for Best Directing at the Directors Awards 2017, Gold Award for Best Director at the Independents Awards 2017, Award of Merit at the Accolade Global Film Festival, Silver Remi Best Comedy at the Houston International Film Festival, World Cinema Award at the Culver City Film Festival , the Grand Jury Prize at the LGBTQA Film Festival, Best short at the London Independent Film festival.

Having launched her career as an actress and dancer, Flaminia enjoyed working internationally across Europe, performing in the UK, Spain and her native Italy. Prior to establishing LonRom Film Production, Flaminia honed her skill set and rose up the ranks as production manager and 1stAD to then become Director and Producer.

Looking ahead, Flaminia and her team are in development with two feature films, Luton to Leicester andA year in London slated to go into production in 2019 and 2020. Known for her passion and dedication she has written numerous articles on various art topics and her work has been published in industry magazines and journals. In addition to her lifetime membership in the WAoFP, she is a member of WFTV and Directors UK. Outside of her professional endeavors, Flaminia can be found travelling, attending contemporary art exhibitions, playing tennis and skiing. She resides in London.

Worldwide Association of Female Professionals Member Flaminia Graziadei can be found on the Association Directory, where she is looking forward to networking with you.