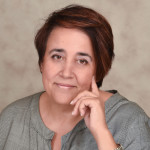 Irene has been in her current career for 17 years, and in her field for over three decades. As Corporate Communication & CSR Manager for Aegean Motorway, she truly enjoys the scope of her work, and speaks at seminars and conferences about communication and crisis management through the company. She likes being involved with PR, and has always been featured in several media outlets, such as the Greek Reporter and Greek Observer in 2017. She has recently launched her PR Agency – THINQ PR – with offices in Central Greece, Athens Greece and representatives in The Netherlands.

On an average day, Irene handles all public relations with the local government and the state, all media and organization aspects for events, manages budgets and files reports. She also advises her clients on communication and PR strategies.

She is a certified CSR practitioner, and there are only a few 100 in the world. She is always looking for change, and is going forward with hard work, determination, and most importantly, common sense. Just last year, she organized a massive event to celebrate the completion of the motorway construction work. There were more than 3000 people, press, VIPs, government officials in attendance and the event ran flawlessly. She speaks Dutch, English, and Greek, and volunteers through Aegean Motorway with an initiative for Road Safety Awareness that she started.

Worldwide Association of Female Professionals Member, Irene Zavridou, can be found on the Association Directory, where she is looking forward to networking with you.