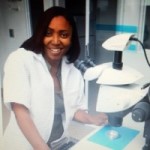 She started her illustrious career graduating from The University of East London School of Health, Sport, and Bio science with a Bachelor’s Degree in Life Sciences with Honours. She then went on to complete her Master’s Degree with Merit in Clinical Embryology from The University of Leeds in 2008. Denise started her career as an Embryologist at The Bridge Centre, London. The duties expanded to not just private but NHS but travelling to Italy, Turkey and Egypt to consult and provide embryology services. Later moved and practiced at Lister Hospital as Senior Embryologist for over 9 years overseas experience in Atlanta, USA and Jeddah, Saudi Arabia. She has also held the post of Laboratory Director at London Womens, Harley Street.

Denise is a Lecturer and Mentor and has been published in The West Indian Medical Journal . She is a Member of The British Andrology Society and The British Fertility Society as well as the ESHRE (European Society of Human Reproduction and Embryology). Denise has the distinction of being the first full time Embryologist in Jamaica. She is looking forward to networking and connecting with other like-minded professionals, and to gaining the recognition and credibility of being a member.

Worldwide Association of Female Professionals Member, Denise M. Everett, can be found on the Association Directory, where she is looking forward to networking with you.