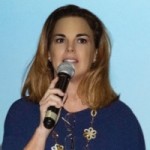 Pilar Valdes is the founder, owner and CEO of Welcome Bees, a strategic development company focused on opening new markets in linguistic services for children in primary and secondary school. She works together with different schools across Spain and native language speakers to teach kids how to communicate in English and French. The programs usually last 3 to 7 days depending on the package that the schools pick, and generally functions as an educational sleep away camp, because not only do the kids learn, but they are also accommodated with a place to sleep and eat while doing the program.

Previously, Pilar worked as a director for an international school and realized that many of the teachers who taught in English and French were native speakers of these languages. This gave her the idea that not only should kids in international schools be learning from native speakers, but that also in other schools language should be taught by native English and French speakers, to make it easier for students to learn by speaking with someone fluent in the language.

Pilar holds a Master’s degree in Touristic Quality from the Universidad Politecnica de Madrid (2006) as well as a Master’s in Hotel Management from the University of Murtia (2011). She is a member of a local professional association for businesswomen, and has spoken at conferences due to her job in the regional government. Additionally, she has received multiple regional awards and has had articles published in quality systems in the years of 2004 to 2006.

Looking ahead, Pilar plans to transitions away from her job with the regional government so that she can be committed to Welcome Bees full-time and take it to the international level– not only teaching local Spanish students English and French, but also being able to teach students from other countries. She credits her success to hard work, dedication and passion.

Worldwide Association of Female Professionals Member, Pilar Valdes, can be found on the Association Directory, where she is looking forward to networking with you.