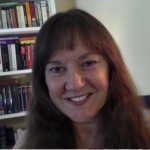 Patricia LaRue is a Software Consultant for Software Brew, LLC, a company she recently launched to offer global software consulting, training, and web-hosting services. A pioneer in software development, Patricia entered the field in the early 1980s, becoming one of the few female software engineers at the forefront of the computer revolution. A seasoned expert in computer science and software, she is highly sought after for object-oriented and database design, and client/web server design.

Upon taking a night computer class at a local public school in early adulthood, Patricia discovered her passion for computers. She earned a Bachelor’s degree in Business Management with a concentration in Computer Science from Eckerd College, and quickly established herself as a rising talent in the software development field.

During her career, she has served in different roles on many projects.  She worked on the Shuttle contract for the Aerospace Industry at Vandenberg Air Force Base in California.  She also worked on the Fairchild Aviation Flight Recorder (commonly known as a “black box”) software at Fairchild Weston Schlumberger in Sarasota, Florida.  One of her most recent and rewarding projects was working with the inventor of Touchless Fingerprinting technology at IDair, LLC.  There, she was responsible for designing and developing the software for multiple security hardware devices including IDair’s ONEprint® and mobile devices for both Android and iOS. She has also worked on multiple contracted projects for NASA and the Defense Industry at Redstone Arsenal in Huntsville, Alabama as well as many enterprise-wide commercial applications for such companies as GTE Telecommunications, Ceridian, Alltel and Emerson Network Power.  Her experience encompasses many different software programming languages and platforms as well as Relational Database Design and Development.  She has served in recent years as a Systems Architect, Software Architect, and Principal Architect on both large and small-scale applications using popular notation systems such as the Unified Modeling Language (UML) Diagrams and Entity Relationship (ER) Diagrams. She currently serves as the Senior Software Engineer for Archarithms, Inc.

Passionate about equality for women, especially in STEM (Science, Technology, Engineering, and Math) careers, Patricia is seeking to expand her career into teaching, speaking and writing on the topic. She is the author of a training manual, Introduction to SQL and Relational Database Management Systems, which generated over $700,000 in revenues the first year it was taught. She is still fighting and advocating, three decades later, for the legitimacy that women professionals deserve.

Patricia resides in Huntsville, Alabama, where outside of her computer endeavors she is also an accomplished artist who works with jewelry, painting and more: www.softwarebrew.com.

Worldwide Association of Female Professionals Member of the Year Patricia LaRue can be found on the Association Directory, where she is looking forward to networking with you. 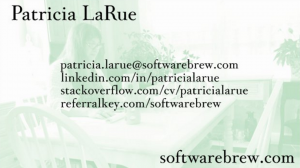