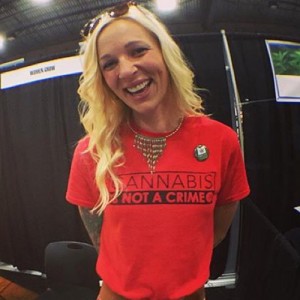 Whitney Hobbs is the Co-Owner and Founder for Highly Distributed since May of 2015.

Highly Distributed is a wholesale cannabis distribution company based in Portland, Oregon. The core of her business is connecting the highest quality suppliers with the greatest retailers. The industry is fresh and is now truly emerging. There is room for maturation and a new level of professionalism that can be infused into the cannabis industry. Inevitably, a lot of what Whitney does is provide feedback and support to the companies within her network so they are able to augment and evolve their brands, enhancing their success.

Whitney obtained her Bachelor of Science in Biology at the University of Montana in 2011.  She worked for a start up brewery, Draught Works, where she fell in love with craft culture and entrepreneurship.

During this time she began to talk with her brother about his profession in California. He was running the sales division of a successful cannabis extraction outfit.

Whitney progressed naturally into the same industry as her brother, who has always inspired her.

She took a leap of faith when she decided to leave her home in Missoula, Montana to build an Oregon company, at the inception of a regulated cannabis market. Plant medicine and the holistic side of cannabis fueled her flame. Her day to day includes interactions with patients, business owners, scientists, health professionals, legislators, lobbyist, designers and of course attorneys!  Over time, Whitney developed one of the largest distribution networks in the state of Oregon. The most rewarding aspect of her career has been being able to have a sense of community.

In the next 3-5 years, Whitney wants to focus and establish a premiere, craft cannabis distribution company. She also has her sights on the bigger picture as state lines open and a national cannabis movement takes off. The highlight of her career to date was finding the courage to open a business.  Whitney looks forward to remaining ahead of the curve.

Worldwide Association of Female Professionals Member Whitney Hobbs can be found in the Association Directory, where she is looking forward to networking with you.